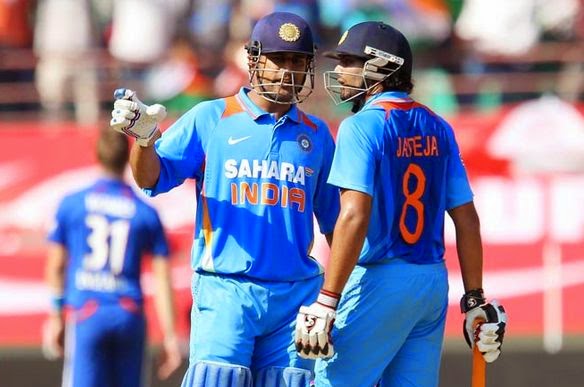 In World Cup Jadej is an out of form. He is a great player and has played three triple centuries in India's first-class cricket, but in World Cup 2015 has scored only 3, 2 and 13 in this tournament.

The 26-year-old walked into bat at number seven on Friday with India tottering at 107-5 against West Indies chasing 183 for victory but his innings ended with a miscued hook shot off Andre Russell after a 27-run stand with Dhoni.

Dhoni, who took India home with an unbeaten 45, was not amused and told Jadeja it is time to step up.

"He needs to improve and needs to step up really. We have a lot of faith in him but at the end of the day you can't really play with hope," Dhoni told reporters at the WACA. "What you want is actual performance on the field.
"He has that capability, he is definitely talented. He needs to keep believing in himself.
"Every batsman is tested in a few areas. They will bowl short-pitched deliveries to him, he will have to find a way in which he can tackle it."
India also have Akshar Patel in their squad, who bowls left-arm spin and bats in the lower order. Jadeja has been preferred over him because of his batting.
Yet Dhoni said another option for India would be to move Jadeja, who has taken six wickets in the tournament, higher up the batting order.
"The second option will be we try to give him a platform where he doesn't have to worry," Dhoni said. "He goes and freely plays his big shots.
"We'll have to assess all of that and we'll have to give him a bit more liberty to play his big shots."
India's bowling was considered to be their weakest link before the World Cup, but they have managed to dismiss all their opponents in their four matches, including top sides like South Africa and Pakistan.
The fast bowlers have bowled with good pace and have managed to peg back the batsmen with their short deliveries.
"What the bowlers are doing really well right now is they are hunting in packs," Dhoni added. "We are backing one good over followed by another good over.
"That actually increases the pressure, and finally you get a wicket out of it."